Tonight I was watching on my Powerbook one of my favorite movies, The Paper, a great movie about a newspaper set in New York City. The movie came out in 1994--I did a screen grab from one of the scenes from the movie: 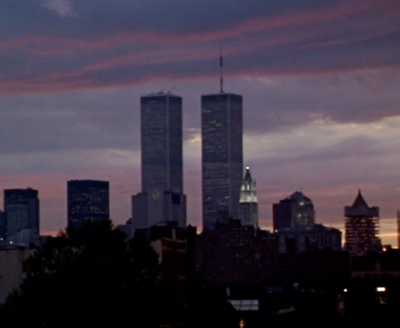 It always strikes me when I see pre 9/11 movies set in New York, and when they pan to the famous Twin Towers. Whenever I see scenes like this in films I can't help but feel a mixture of deep sadness and also some rage over what those terrorists did not that long ago. And now we are treating those scumbags like common criminals rather than enemy combatants, giving them Constitutional rights in our legal system.
This is a war. They did not commit conspiracy to commit murder, they committed an act of war. They don't deserve their day in civilian court, especially in New York City.
Indeed something is missing.